A quick post here on Shhhhh! Digital Media by myself, Brian Joseph Johns.

I disagree with the statement: If you don't use it, you lose it.

I used to know someone who lived by that eidos, and quite simply put, it is completely nonsense.

That might apply to bad habits such as smoking or other habits along that line, but it certainly doesn't apply to your skills and abilities in life.

I've never been in any situation where not having ridden a bicycle for years, that I've been unable to get on and ride again, assuming the bicycle is completely functioning.

Likewise, I've never jumped into a swimming pool or lake after not having swam for years and suddenly found myself unable to swim.

I've never sat at a fully functioning piano or keyboard and found myself unable to play having not played for some time.

I could name a hundred other things like that, all that prove that if you don't use it, you don't lose it.

There are people who live by and enforce that sort of nonsense in society, mostly out of the fact that they live according to the idea, that if you don't use it, you lose it and it goes from you to someone else. So bits and pieces of one's life can be taken from them and applied to someone else's according to such an idiom. If that person goes to use that skill again, they're actually forced to buy it from someone else, even if they already fully know how to use it. I do not live by this ideology and never will. If I work today as an author, that doesn't mean that I lose the fact that I'm also a computer programmer, artist and musical composer. I haven't ridden (or saddled) a horse in years, but I guarantee that if I jumped on one tomorrow, besides being sore for a week or two afterward, I'd be completely at home riding.

That leads to the next topic: You truly can be more than one thing at a time.

Anyone that is against that statement has obviously not considered much in their life. For instance, being a parent (which is and can be a full time job) doesn't mean that you cease to be other things, arising from your work and vocation in life. A parent can be a parent, and also a professional as per their work (and many are).

In this day and age, many people take on many roles and there are few people that stick strictly to one thing in terms of their work or skills.

I myself work as the CEO, sole Author, developer, editor, occasionally composer and janitor for Shhhh! Digital Media, a company I built from the ground up. As it grew, I started using more and more third party art work (which I've prominently credited on the Credits page) and as I continue to grow, I'll utilize my resources to bring more people onboard. For now, I do things this way, one hat, many roles as many people do in this day and age. If I perform one role one day, I don't lose any of the other roles I take on, which goes back to point number one, if you don't use it, you don't lose it. I can work writing today, and then in the afternoon render artwork for my stories, without losing my skills as a programmer not having used them that day.

Finally, you don't lose what you express.

If you're visiting a service and the receptionist asks you for your name, you're not literally giving them your name. You're expressing it for the purpose of their records of you having visited their service, possibly to schedule your service, whatever it may be.

Protecting those things about yourself isn't selfish. Its selfish of people to try to take them from you, or try to trick you into believing that they've been taken from you, perhaps using social brutalism to pressure you into going along with that idea. Some people that do that also attempt to use colour symbolism to achieve the same goal.

I don't go for sponsorship. The idea of paying someone else to be allowed to wear aspects of your own identity and skill set. That's most often criminal extortion when and if people do that to you because rightfully, you can be whatever you want to be. So don't let yourself be walked over that way.

If you're being bullied by groups of people, chances are they're trying to transfer something from themselves or their friends onto your burden. Unfortunately in these days there are also a great many people who believe in that sort of transference. The ability of an angry mob to transfer their negative energy and crimes to the people they target, simply with their anger, abusive nature and the symbolism of colours.

My advice to you is not to fall for it, to believe it and not to go along with it (unless you want to).

The truth is that we grow and change in small ways every day, and consistency from day to day isn't going to be exact for any one of us, and anyone who tries to force you to be so is limiting your potential for growth. Think about it, in order for you to be consistent with being yourself as a child, you have to have all the same habits and activities. As an adult, your attention and interests will be directed to very different things, that might have some similarity with those things you did when you were a child, but not exactly the same.

So does that mean that you are no longer yourself? Not at all. If you play by the rules of mob bullies that try to hold you to things like that, you literally will cease growing as a person in life and become a carbon copy of the person you were yesterday, which would mean you're not growing at all by chasing the kind of consistency such mob bullies are trying to steer you towards. This is just a method such persons have developed in order to take the best parts of you for themselves by turning your identity into a game of consistency. They use all sorts of tricks including manipulating you using the symbolism of colours and peer pressure, all with the goal of trying to take aspects of your life from you based upon your inconsistency with your self of the past.

If you look at most of the people addicted to this activity, most if not all of them are in a rut, no matter their income level high or low, and will be in the same place for the rest of their life. When they see people motivated to progress in life, they tend to become like vampires, attempting to keep such people trapped near them so they have a constant source to fuel their identity consistency game. Just being aware of this fact is enough to liberate yourself from it. Getting away from it might take years and fair bit of effort, but it is possible and many people do. I certainly don't spend the energy to wish them anything, including anything ill. Its a waste of energy. It must be a living hell to know that years from now, they'll be stuck doing the same thing, day in, day out while anyone striving to liberate themselves from it may achieve that goal, and go on to liberate others from it.

Ask yourself, who are the ones living in their own prison? The mobs abusing people in such a manner, or the ones trying to liberate themselves (and others) from it. At least the ones liberating themselves and others are more likely to be free, and live a more fulfilling life.

I suspect that the latest chapter for What Different Eyes See, the Vietnamese Addition will be completed sometime in mid August, possibly later. I've added a bit more today as well. 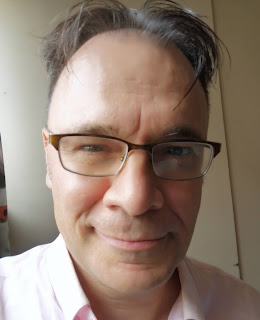 I love to vote.

Hate is not love and love is not hate or blood.