I don't know what happened, but I haven't received many emails today. I guess that word got around. For the most part, my neighbours haven't been harassing me as much, though they still are doing so.

At around 1 PM EST on Monday afternoon while I was watching Disney's Mandalorian, they suddenly out of nowhere began a storm of harassment. No email came in or anything, so this just arrived out of nowhere from apartments neighbouring mine.

For the whole morning since 10 AM, I haven't received a single email (except for one or two).

So the blue team that does hate means love sounds mostly like they're done.

The thing about hate means love is that the people who live that way attack others in attempt to provoke them to react hatefully in turn. Its like milking a cow. You see, by being hateful, they believe that they're sharing the worst and best of themselves. Most of them around here that do that have little good to share, if any. So really for them, its a means of dumping their garbage onto other people and attempting to provoke the people they dump on to react harshly, so that they share all of their good and bad with the mean person.

I'm not a member of any cult that operates that way and never will be, and every time I'm confronted by them, I'll expose them. Simple as that.

So they've mostly stopped now thankfully but they're still attempting to provoke conflict. Most of their attempts are racist as well because as I said, they don't like the idea of a white guy being in a relationship with a Mandarin Chinese woman. I'm not Steve Vitali though and I live in Toronto, Ontario, Canada.

I don't believe in the holy spirit. I'm an atheist that leans towards Buddhism and Taoism. 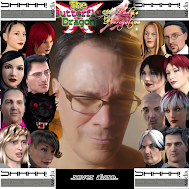