I, like any other Canadian had the chance to apply for the benefit, which would have put me in a substantially better position financially but I chose not to because I felt that I'd be taking advantage of something that is really for workers who are in much greater need than myself (ie that have a family to look after).

This all played out with the use of colour symbolism as well as a big part of the effort by the people conducting this activity. For instance, the ideology defines the colour blue as meaning a number of different things, and if I don't accept any of those things, I lose my phone number. Ironically, I'm with Lucky Mobile, whose logo colours are blue and white.

So in other words, I lose my identity if I don't accept this ideologies definition for the colour blue, or accept their abuse and harassment and my identity is replaced by someone else's who is in debt to the Government for the CERB. Also, the group doing this operated in a coordinated fashion, sharing insider information about me that either came from illegal spying on my computer, or was shared directly with other people by ideology members working within Lucky Mobile and the Canada Revenue Agency, which would make such activity illegal.

For the last few days, I've been harassed excessively by people in my community about the activities of whomever the person whose identity I received and this swapping of identity also replaced my original culture on the basis of skin colour in order to match this ideology's colour symbolism scheme. I'm a white guy, and they tried to replace my identity with that of a black guy. Nobody has white skin and nobody has black skin and everyone has a uniquely different colour of skin at the finest level, but that's not the point. The point is that my identity is being replaced by someone else's.

I'm certainly not anti-Government or anti-authority at all. I'm not a member of any religion or ideology that is either. I don't use, buy or sell narcotics and I don't even smoke. I'm certainly not a hater either. I think abuse of this nature is geared towards polarizing people along the lines of race, and propping one person up as the love side, while pushing another person down as the hate side. This ideology seems to plan far ahead for such shallow daily competitions as well and I just happened to be their target in an effort for them to expunge their responsibility for abuse of the CERB, while taking my own identity from me and wearing it as their own. That's a pretty common theme around here that many people participate in. Working and non-working alike and that makes it very difficult for anyone so victimized to participate in the community. This is a key issue around this time in the stress of a COVID lockdown.

I've never been incarcerated in a jail or prison as most if not all of my choices have kept me away from as much. Ironically some of the people harassing me are doing so from neighbouring apartments and I have no mental illness by the way. Just stress of harassment by multiple abusive people. Some of the harassment is coming from outside the building as well, during the lockdown.

This isn't a complaint as I'm not a complainer. I'm protesting abusive treatment by an abusive cult. I'd never take someone else's voice away by any means. Colour symbolism, recording, religious shunning or by union racketeering. I'm an atheist that leans towards Buddhism and Taoism. There's no shunning in any of that, but I am often certain subjected to it and this latest scam is certainly eye opening.

If anything, I'd say the members of this ideology are trying to provoke me to appear anti-Government and anti-establishment, possibly so they can burden me with other crap related to those ideas. I believe that we are all being polarized that way by bullies like this. Forget Government versus anti-Government. So best not to direct your angst against the Government or Establishment, because there are people provoking you to do so in order to polarize everyone into such a showdown. The problem is the people doing the provoking and polarizing. Once you're on one extreme side, its like a see-saw and they'll bounce you and the other side around as a form of control, vacillating you between love and hate according to their timing. That's another one of their big secrets in terms of methodology and modus operandi out the window.

Now with that knowledge, reclaim your lives. Don't direct your negative or hateful energy at the side you're being pit against. As a matter of fact, don't direct it at anyone at all. Just remember who were the culprits polarizing you and take that knowledge under advisement. They'll answer for it sooner or later but don't take that weight upon your shoulders for them.

I just wanted to share some information in case others are experiencing similar problems. These times are difficult enough as it is without people trying to polarize us against one another or to switch identities with us.

Have a good weekend and I'll be back with Wounded Aerth Part II on Sunday or Monday. I hope you enjoyed Wanda... 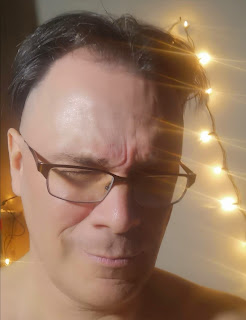