I believe that the neighbours spying on my computer knew this, and assumed that I was playing it and attacking Japan. Perhaps even taking the side of the forces of Future Tangent Industry from my book The Butterfly Dragon II: What Different Eyes See as in the ending, the Japanese Imperial Palace is being under quarantine while agents of FTI attempt to capture The Butterfly Dragon (one of the most recent plot elements).

When you're writing a story or book or screenplay or a video game, you are all sides of the story at once and this is regardless of your own personal life. For instance, my own love interest is Mandarin Chinese, but that doesn't stop me writing as the character Barris in A Lady's Prerogative, whose lover is a Canadian that is part Japanese and part Austrian (her mother is Japanese, her father is Austrian). Writing that role, doesn't change anything about my own personal life much the same as watching a movie doesn't change any aspect of my personal life, except perhaps introducing a perspective I hadn't previously considered. That's what story telling is all about. Having an experience, intellectual, moral and emotional without the associated risk to one's own life and well being for the purposes of growth.

So my playing Rainbow 6 Vegas 2 wasn't a plot to cause any kind of grief for Japan or her citizens. In fact the character I was playing as is a Japanese woman. So there you go.

This really gets a bit crazy, because the people who spy on me, do so in order to take aspects of my stories from me, and force an identity onto me that is not mine. One to replace my own identity and often taken from someone else with whom I have no association or similarity in terms of lifestyle. You know, the kind of things that cults do.

Actually, the only thing that they haven't done so far is lace fruit juice with cyanide and get everyone to drink it in an act of mass suicide, but I honestly have to wonder how far off that scenario is if they're regularly conducting identity theft and swapping on a large scale, and blocking any attempts by Government and authority to rectify the situation?

Hence why there's no new material for A Lady's Prerogative or The Butterfly Dragon. Not because I'm incapable, but because I simply choose not to under these circumstances. It's not like I've had the ability to write or create sapped from me by exorcism or some kind of nonsense like that.

Ironically, I'm currently looking for voice talent to fill out the roles of the characters for A Lady's Prerogative and The Butterfly Dragon in another project that will draw from the wealth of work I've already done with these properties. Try doing that on a limited budget and with a cult trying to take everything from you by spying on you illegally. I will also say this that a court action is currently being devised to deal with this challenge that will deal with it in a fair way.

The message I'm getting so far is that maybe people don't want to see The Butterfly Dragon or A Lady's Prerogative anymore?

If that's the case, then simply go elsewhere and read other things and don't pay attention or steal my work. Pretty simple.

I do this because I love it, and I continue with it because there might be a future in it someday and even if there isn't: I still love it.

There's lots of other creative story telling out there that involves superheroes and witches (Marvel is very busy in this aspect for instance or you might want to show some support for the new Wonder Woman 1984 movie). There's more than enough room for all creative content producers.

If you don't like what I'm doing here, then please enjoy someone else's creative work.

Don't take my thoughts and creative expression from me in order to prevent me using them or sharing them or to claim them as your own. I mean, in the grand scheme of things, who knows what the moral consequences of doing so really are? Just because you can't remember anything before you were born and you can't remember the future and anything from the point after you die, doesn't mean necessarily that there's nothing beyond either end of our mortal coil.

What if consciousness is physically independent of our body (as it likely is) and can be observed partially as a phenomenon of Quantum Physics, without getting too woo-woo? Wouldn't that mean that our ability to think is independent of the linear time bound aspects of our memory? Our memories are physically recorded to our brain's neurons and linear records of our physical experiences, but the actual thinker is beyond space and time, making our brains more of a sort of quantum radio receiver for our consciousness, of which each one of us has uniquely, especially those who've transcended the physically bound nature of our behaviour that make us operate more automatically than consciously.

Sure, you can light that cigarette if you want, but just because you can't see the inside of your lungs, doesn't mean that there isn't consequences for smoking, and that doesn't take anything away from a Native Sweat Lodge, within which smoking is more ritual than a pseudo social habit. They do it to commune with the spirits of their ancestors and the land and are aware that there's a price for doing it. For them wagering aspects of their health to commune with spirits is worth the risks to gain knowledge that can help their tribe.

So when you try to take away from someone else by really sneaky and underhanded means, you're really taking on consequences that you can't see and probably don't understand. As long as you're aware that there are likely consequences, you can make your choices responsibly, though there seems to be evidence to support the idea that ignorance isn't an excuse in the eyes of nature.

Just because you don't know about gravity, doesn't mean that the fall won't hurt you or even kill you. This is reminiscent of the lemmings myth, whereby they are understood to jump off cliffs as explained in a Disney documentary from 1958. In their defence, the whole lemmings committing mass suicide misconception comes from the fact that lemmings are migratory and do so in large populations.

Many of the places that lemmings populate have changed rapidly, enough so that there are many instances of massive population die off as a result of the changes to the land, such as continental drift or erosion. In such places where changes have occurred more rapidly and detrimentally to their migration, the population are more exposed to natural risks arising from those changes. Because their migrations often involve flock like behaviour, when one makes a poor assessment of obstacles, that can lead to hundreds if not thousands following in the same foot steps, merely because they're following their neighbour blindly. That's what flock mechanics are and the nature of cohesion for flocking behaviour is different for every type of animal. For birds and fish, its alleged to be magnetic. For small mammals, its a combination of auditory, sight and smell. When the cohesion binding groups together is stronger than their independence, they're at risk for the bad choices of those ahead of them in the group.

So the metaphor we can draw from that is, just because your neighbours do it and everyone else you know does it, doesn't mean that it doesn't have consequences if you don't make your own choices based upon your own criteria.

One could simply apply this logic to the anti-mask movement in the midst of COVID-19. If you aren't the kind of person that makes your own choices and can clearly see that there's clear benefit to wearing a mask, not to mention the benefit for others, then you might follow a bunch of people into the wrong choice that could cost the health of you or your loved ones. Cooperate, but think on your own two feet.

So Disney were likely trying to use the power of narrative drawn from some aspects of nature to teach an important lesson, which is to cooperate when you can, but to be independent and responsibly so where it merits your own well being and the well being of your loved ones. Besides, you never know when you might set an example that saves the rest of the flock when you make a choice that takes you on a path independent from them. They have nothing to lose in such a case. If you make the wrong choice, its your consequences. If you make the right one, they just might follow you and save themselves. 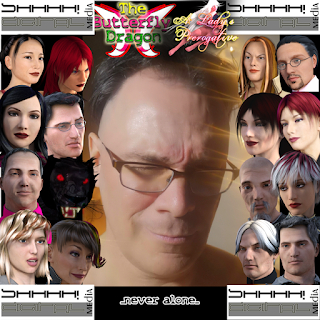