Ending The Year On A Balanced Note

Wear a mask where required for safety and maintain social distancing measures.

Fighting for what I believe is ending the year on a balanced note, without having to struggle to achieve balance.

Dealing with it in such a way that in the year 2021, there is definition and awareness will lead to progress. By sharing what I've learned about coping with it, I'm helping others to overcome the same or similar hurdles.

People that force others into a confrontation of love and hate or blood and fire are trying to destabilize balance and polarize people so that we're all one sided rather than in the peace of some kind of balance. I think that the kind of ideologies that conduct this sort of thing call it "cow tipping".

Its a reference to a cow (bovine variety) with a black and white hide, and trying to get that cow to fall over to one side of either black symbolism or white symbolism in terms of the representation for whatever those shades symbolize, hence creating polarity and extremity in the person being so treated in this way.

In my experience, they do so using three methods:

The most important things you can do to protect yourself are to try not to react to their attempts, though their efforts don't result in your progress. Only your efforts result in your progress but be grateful for the challenge keeping in mind that being the reaction side of an action/reaction cycle does not define you as lacking consciousness at all.

The arguments that support this concept are:

Those who would disagree with any or all of these statements are justifying slavery as the cause of freedom. Justifying adversity as the cause of prosperity and finally, blaming life, their parents (and certainly women) for the existence of death.

Its very easy to fall into the cycle of blaming people who operate in this way for the devastation that such activity can result in within your life, but honestly, don't give them that credit. They'll learn in time that their one sided investment will fail regardless of the convenience of polarity reversals or not. That doesn't mean that you have to follow them and when I make this statement, I'm speaking as much to myself as I am to others looking for a way around this sort of thing.

Take responsibility for your own behaviour and reactions and nobody will ever be able to take anything from you and forgive yourself when you fall short.

There's a difference between individualism and collectivism, and each of those concepts is an extremity.

Remember that you are an individual mind (the thinker of the thoughts) that chooses to participate and cooperate based upon the fairness of the due between yourself and the group (any group).

Most people involved in the activity of trying to destabilize you are trying to create imbalances that lead to the imposition of debt, for or against your favour in order to unjustly take or give more than is justly due.

When you find yourself in an economy fixated on those means of operation, you'll live in a constant cycle of poverty and plenty that is determined by the adversity of the people I've mentioned conducting this activity.

This is their attempt to gain control over any aspect of your life that can be manipulated to create similar cycles so that you end up as a mule chasing a carrot (or grape, or blueberry, or apple, or banana, or kiwi) that is ultimately in their hands more so than yours.

Don't allow them the power of extremity and deficit over you when it comes to any aspect of your life and if you fail to achieve this at any point, don't be too hard on yourself.

We're already free just by the simple fact of our awareness.

As far as the other very pertinent struggles we're all facing in the world, we'll get through this and hopefully losing as few of us as possible, preferably none.

Here's to 2021 and to those lost that helped us all to get here. 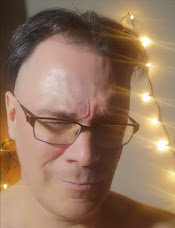 I'm Brian Joseph Johns and this is

I am an Atheist that leans towards Buddhism and Taoism and my love interest is Mandarin Chinese.