Philosophy: Life And The Great Show...

Managed to get through this week without freaking out from harassment by my neighbours and others locally, which is good. It certainly goes a long way towards my credibility with this site.

My harassers are people in a mind control cult, that believe they possess and mind control other people. No really. That's them. They seem to have selected me as their victim and this is something that has been going on for many years. A very abusive cult that literally tries to rewrite a person's history, using long sessions of abuse and harassment as part of their method.

I myself enjoy the fantasy role play aspect of that in some of the entertainment I watch online, but its nothing I'd ever pursue in real life, trying to control someone. I enjoy other people's creativity too much to want to see my own reflection in them by trying to control them. I can tell you that I'm not possessed by anyone and that I'm very much myself.

The way it seems to work is that this cult causes a great deal of stress in their victim, culminating in a peak of anxiety and sometimes possibly anger. It is akin to them repeatedly kicking you in the shin many times over the course of weeks, until the pain gets to be too much and you burst, going on angry rant about how other people see it happening and do nothing to stop it. As long as you don't react physically, things are usually alright, but the cult responsible gets their kicks out of getting a reaction from their victims, and convincing others they're controlling their victim. They're really a large group of narcissists that constantly look for their reflection in the people they victimize.

It does little good to continually explain this because people are going to come to their own conclusions no matter what. People nearby could be part of this cult, and there's no chance of swaying them and such people aren't worth the effort anyway. Others at a distance who are aware that something is going on, are going to come to their own opinion no matter what you do. From all of those people, you might have a few that can empathize or at least comprehend the bigger picture but in any case, most people will come to their own conclusions and there's little you can do about that.

I persist because no matter what. I mean we're all part of a great show in this life. Much like Shakespeare stated: all the world's a stage. We're each putting on a show for what we believe to be an audience that may or may not be there, or even care about the show. We're trying to convince them that our actions are just while others' are unjust though in the end, we all know the real answers within ourselves. You can run from everyone else but you can't run from yourself. You know the truth behind every one of your thoughts and actions throughout life and your real intent. I find that to be a liberating thought rather than an oppressive one.

When this show's over and we take the final curtain, there are only a few possibilities.

There could be absolutely nothing. We die and that's it. The matter that embodied the point of presence for our consciousness is dispersed back into the universe, which forever progresses towards a state of higher entropy until the point at which nothing can happen. All life is gone and there's nothing and nobody left to remember it. All of your experiences and the experiences of everyone that you loved, had concern for or for whom you experienced animosity are gone. All of it. Nothing left. No record of it at all. Just gone forever. Once you leave the stage, that's it. You cease to be.

The second possibility is that there's something beyond. That this life is only a step in a much bigger process for our consciousness. The reality of that process may or may not resemble the ideas of some of the philosophers and theologians that have existed, and it might embody some form of progression or digression, karma and dharma (understanding through life experience). Philosophers, scientists and atheists might be right about the nature of conscious and its progression beyond that point or theologians and religions might be right about what comes next. Either way, there will likely be some form of meaning and progression, confirming that the universe is part of a larger architecture with a creator of some kind.

In either case, there's nothing you can do about it. If you've been victimized for your life or you've victimized others, you're on the path you're on now. If there's nothing, it won't matter at all. It will all be gone along with any recall of it ever having happened. If there's something in the form of an afterlife or after consciousness, then chances are there's some form of meaning to this. You'll have a life review of some kind. You might have to deal with karmic issues related to your true intent throughout life. There might be a heaven. There might be a hell. Who knows. In this case though, a case where there's more, chances are we'll be dealing with our life issues and experiences. Consciousness would inevitably be the fundamental reason for existence, and existential experience a necessary classroom.

In either case, I'll do pretty good.

My harassers on the other hand. If its the second possibility, they're going to have some serious karmic issues but pointing that out doesn't make me better. Its just pointing out the inevitable. There is no "win" and "lose" or "better" or "worse".

Between now and the end of my life, I just have to get through it and enjoy it and learn as much as I can, between this cult's abuse sessions. They aren't in a position to learn or grow from this experience, so I've got that responsibility all for myself. Colour symbolism won't mean a thing when we're gone and that's not a shot at Ford's use of colour coding to help deal with the COVID-19 pandemic (a good use of colours by the way).

If there's nothing, and you're trying to impress your friends and get away with as much as you can before you die, that's your responsibility because in the second case, there's going to be issues you can't run from and I'm not saying that as part of any psychological attempt to dig at the conscience of anyone. Only you truly know yourself and if there's something like that beyond, then chances are your life review will deal with that aspect of your life and truth. Ironically many people experience a life review in their near death experiences (including myself on Terraview Avenue in 1992). Its not a bad experience I'm guessing unless you have some serious issues.

So that's why I persist. Why I keep on going, no matter how hard I get pushed down.

I figure, I'm not the audience of my harassers. I mean I don't really pay attention to them except for their harassment and abuse. Beyond that, they don't exist to me. I'm not their audience because I'm not watching them. They're all watching me and their expression is usually abusive or destructive in some way.

Some content creators out there, writers, video, movie makers, streamers, big and small budget, song writers, artists and publishers. Anyone who creates content to present and express something to the world are kind of like us on this lonely planet in this spiral arm of the Milky Way Galaxy, trying to see if there's anyone else out there in the unfathomable expanse of this universe and existence.

By expressing ourselves, we're kind of sending our message out there into the world. Many people might perceive that expression, hearing or seeing it through some kind of medium. Many might ignore it as they can't relate to our expression and experiences. Others might notice it and regard it for a time then find something else to interest them. Some might hear or see it and try to steal it and our identity along with it in their cruelty.

Then there's those who take heed of it and whose heart might be touched by it, confirming that they're not alone in this lonely world. They're inspired to try to express something of their own and in doing so, they include an ode to our initial expression. A tip of their proverbial hat. A curtsy of their skirt, or both. Some positive and inspiring way they choose to let us know, they heard or saw what we had to express. Something to let us know that we're not alone and that we touched their heart in some way.

That defines the entire reason for our existence. Just those few times we're able to express something meaningful and to receive a reply, letting us know that we were never alone and that those who gave us their hidden reply felt the same way, no matter the distance.

The people that abuse and harass those who make their attempts at such expression, most often do it for a very different reason and this includes collectives and cults who do so for the benefit of their own members. They're looking for their own reflection (or that of their fellow cult members') in the people they abuse and harass. They must be the loneliest people of all because they'll never find a reply from anyone else except the frustration of those they victimize, and every time they look at someone else, they'll only see themselves. Without getting too far into aggressive labeling, to a narcissist, other people are just mirrors, reflecting themselves or their similarly inclined friends.

For all of you creators out there. Keep on keepin' on and don't let anyone get you down. Even through this pandemic there's a light at the end of the tunnel. If we don't make it there together, then we'll see you on the other side, if there is another side after this.

I don't do hate means love or love means hate. I say what I mean and mean what I say.

Sincerity before polarity any day.

I'm not a Gnostic and I'm actually an atheist that leans towards Buddhism and Taoism.

I Brian Joseph Johns am not a rose, or a gun. 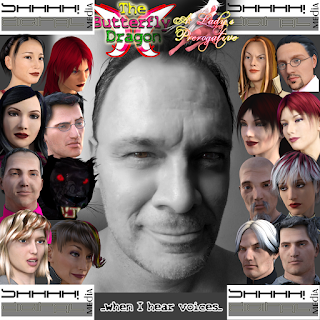 The Aerth Mother from A Lady's Prerogative 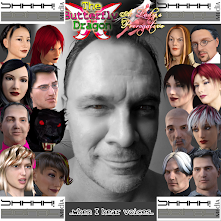