The Last Lonely Lounge Comic: Horror In The Modern World

Read it on this post or in The Last Lonely Lounge Comic section of this site.

In a leisure suit that went out of style in the eighties, he approaches and speaks into the microphone:

When I was a kid, I used to love horror films.
Especially the ones with Christopher Lee and Peter Cushing.
When the studios hired them, I'm guessing they were a package deal.
Two for one.
Hire one, get one free.
Maybe they took turns being the freebie.
They did a lot of horror films together.
Especially horror and suspense flicks.
Many of them dealing with the strange. The paranormal. Monsters. The undead.
You'd always find them in those kind of films.
I'm surprised that when they'd show up at that point in the story, that the other characters didn't throw their hands over their mouth and say:
"oh sh#t! It's those guys. Things must be really messed up if they're here."
"I only called Scotland Yard about my Cat being stuck in a tree and these guys show up?"
He'd look over to his Cat up in the tree and say: "Cat, I'm outta here. I'm leaving town. I'd highly advise you to get down from that tree and follow me, because something messed up is definitely going to happen if these guys are here."
The Cat looks and sees them, and immediately jumps down and helps him pack.
As they're packing, the Cat looks over and asks him: "I can make us a couple of sandwiches for the trip if you'd like?"
He replies: "No thanks. We don't have enough time. If they're here, things are going to get really mucked up in about ten minutes. I'll stop at a drive thru."
In those movies, sometimes, they'd work together. Like Sherlock Holmes and Doctor Watson.
They'd be on the same team, trying to investigate the weird stuff.
Really weird stuff.
Like some guy walking around without his head, borrowing other people's heads.
Or an eccentric British archaeologist and his beautiful daughter.
They always had a beautiful daughter, didn't they.
They'd be delivering a bizarre man shaped box to London on a train, where people are mysteriously dying, their eyes ripped out.
Sometimes they'd be on the opposite team.
Peter Cushing would be Van Helsing, and Christopher Lee would be Count Dracula.
As brilliant and cunning as Peter Cushing probably was, his character never seemed to clue into the fact that it was the tall guy with the pointy fangs and the cape.
I mean he'd get there, and there'd already be two or three people dead with two mysterious puncture holes in their neck. Nearby there'd be this guy, six foot two wearing a long cape with razor sharp canines.
They'd played that spiel many times together.
Probably twenty films.
Yet not in one of them did Peter Cushing arrive on the scene and just out of nowhere, point a finger at Christopher Lee: "Twenty shillings says its him."
The victim's father turns and replies: "make it thirty and you've got a bet."
By the end of the movie the pool is up to fifteen million British pounds. Four possible suspects.
Christopher Lee, the vampire wins most of it, with a few carefully placed bets.
That'd be like insider trading.
So when I was younger, I used to watch those flicks a lot.
As I got older, I began to think that there's nothing like that in the real world.
There's no monsters that show up at night, or the day for that matter.
There's no undead that pop up out of nowhere and attack you while you're in the middle of a conversation with the counter help at a donut store.
One day I'm sitting at home and I get a knock at my door. I checked the peep hole and saw some decently dressed guys in suits. One of them wearing a long black cape.
So I opened the door and asked them: " Can I help you?"
"Sir, we're wondering if we could have a moment of your time?" one of them asked me.
"Sure, why not. What's up?" I ask.
"Have you ever considered life after death?" he asked me, handing me a pamphlet with the words Watchtower Society clearly etched across it.
Foolishly and only proving my naivety, I replied: "no".
In retrospect, we all have twenty twenty hindsight.
I should have just closed the door at that point.
Maybe answered: "I'm blind in both eyes and ears. My nose too."
I didn't though.
About ten minutes later I realized that I was all wrong about there being no monsters in the world.
Yes. There. Is.
And I was clearly within an inch of the gaping jaws of one of the most dangerous of all.
From that moment on, I struggled to warn others.
Believing I was doing the right thing.
Saving lives.
Protecting the innocent.
One day I was channel surfing and I came across one of those old movies again. The ones with Peter Cushing and Christopher Lee.
I noticed how they always tried to warn others about the danger and nobody would listen.
Peter Cushing would say: "There's an ancient vampire that will kill you all while you sleep! Heed my warning!"
In another one he'd say: "...the deadly Mummy of Khufu has escaped from the London Museum and is on a murderous rampage. If you see the sign of the Scarab, run for your lives!"
None of them would heed the warning of course.
All of them would die except for one, and he'd be the one that helped Peter Cushing kill the Vampire or Mummy, dying himself shortly before doing so.
Then I realized that I was just like Peter Cushing in one of those movies.
I'd warn people about the danger and nobody would believe me.
The following week they'd all be doing the same thing, having been "converted".

Going door to door. Asking about the after life and handing out pamphlets with the supposed answers.
It was like a plague.
So I studied his movies and developed techniques for protecting myself.
The next time I heard a knock at the door, I was prepared.
I checked the peep hole, and saw that it was them again. They were back for more.
I unlatched the locks, all six of them and slowly opened the door.
"Did you read the pamphlet I gave you? I'd like to talk a bit more with you about the after life. I bet you considered the questions I had for you, didn't you?" the one with the cape asked me.
I kept my gaze away from his eyes. If you look them in the eyes, you're done.
He must have noticed because he immediately tried to thrust another pamphlet into my hands.
But I was prepared.
Carefully, I reached for my necklace and pulled my Voter Registration Card Talisman from my neck, dangling from a golden chain.
I held it up to his face.
He hissed and shrieked, while the others backed away.
Then my eyes met his, and his power gripped me. I struggled with all of my willpower to resist the urge to burn my blood donor's card and to go out and buy a tacky corduroy suit and join them.
I struggled against him and ran back inside my apartment to my last line of defense.
He followed me, holding the door open as I ran.
He slowly approached and when I turned around.
I unleashed my secret weapon upon him.
"Have some birthday cake!" I said, thrusting it towards him, all the candles lit.
I didn't tell him that it wasn't my birthday. I mean that would be like holding a cross up to a vampire and then telling them you're a Buddhist.
He'd be like: "Whew! That was close. Ok, so where were we? Oh yeah, I was about to bite your neck and then rip your head off..."
So anyway, this guy, he screamed and writhed backing up and out of my apartment as I held up the birthday cake, the candles dancing in the wind.
Then I quickly slammed the door shut and locked it. 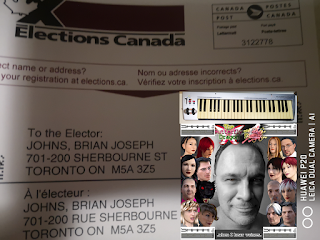