Some Thanks, Some Wishes And A Few Notes.

Thank you again to the YSM Food bank here in Toronto at my own time of need. Great, polite and professional staff and volunteers really making a big difference, sincerely stated.

Also I'm very glad and relieved to hear of Jordan Peterson's recovery. Professor Peterson was one of my favourite lecturers, especially when I was researching The Butterfly Dragon I: Heroes Of Our Own back in 2012.

Prior to that time, many of Professor Peterson's lectures were available through TVO's own series Big Ideas, a great television series from the days of real cable and satellite television hosted by educator and author Irshad Manji, highlighting some of the most influential lecturers of that time. It definitely served as the model for series' like TED Talks and likely inspired the entire generation that jumped head-long into the internet.

It was recently announced that actor and fellow musician Jeff Bridges has contracted Lymphoma, a type of cancer that impacts the body's immune cells, called lymphocytes which inhabit various organs in the body fighting infection. When lymphoma cancer is contracted, these cells begin to grow out of control wreaking havoc on the body.

Jeff Bridges is one of my favourite actors having starred in classics like Starman, Tron and Dino De Laurentis' 1976 remake of King Kong. He continued to inspire future generations starring in films like the Coen Brothers' The Big Lebowski and The Fabulous Baker Boys, two of my favourite films. Fabulous Baker Boys is an absolute must for any aspiring piano player, paying homage to nearly lost days of the piano bar, complete with Michelle Pfeiffer, the seductive professional singer. Jeff stars in that film with his brother Beau Bridges as a piano duo who hire a beautiful singer to breathe life (and gigs) into their act. Michelle, Beau and Jeff reportedly did most of their own musical parts, being accomplished musicians themselves.

I'd like to wish Jeff all the best and I hope that he gets through this with flying notes and colours.

About the Fabulous Baker Boys, watching that film, my readers might be tempted to think that Bryce Maxwell originates in terms of his prowess as a piano player from the two leading characters. I'd have to say no to that, but their characters are part of a bigger archetype to which Bryce Maxwell also belongs. If you haven't seen it, I highly suggest it. Its also a great date movie, especially if you or your date play music.

I grew up with parents who paid the mortgage on the home in which I spent my childhood by working as gigging musicians, as a Baker Boys style act. At that time, they were the highest paid bar act in Canada, my mother Rita Johns, a Juno nominated singer and songwriter and my father David Schindler, a composer, arranger, producer and multi-instrumentalist piano player.

I mixed my love for science into my parents' determination and propensity for music and came up with Professor Bryce Maxwell. He had to serve as a sort of legendary mentor character for Doctor Alicia Westin, so I drew the best parts from my parents and treated it like I was raising a daughter. So there's a lot of my parents in there, and a lot of how I idealize science and scientists alike.

On my own time, I even studied one of the Quantum Physics courses offered through MIT through course ware so that I could write the Quantum Physics based aspect realistically, while mixing a little bit of fantasy while struggling to keep it away from woo-woo territory, without taking away its sense of mystery.

So you could say are all a part of the archetype that spawned Professor Bryce Maxwell as much so as were scientists like Richard Feynmann, Albert Einstein, Niels Bohr and a host of other modern physicists including Michio Kaku and Brian Greene.

I'll talk about who inspired Alicia another time.

So I'm sorry to say that Mike isn't Bryce Maxwell.

I wrote "Nurse, You Healed My Heart" from the book The Butterfly Dragon II: What Different Eyes See, based upon a lesson about the circle of fifths and tri-tone substitutions. A piano lesson my father, David Schindler gave to me when I was fourteen years old. A time that despite only being 38 years ago, was vastly different than it is today.

Sorry to Mike, but he's not the inspiration for Bryce Maxwell nor is he Bryce Maxwell. Both my father and I have gigged professionally for more years combined than Mike has been alive (or playing piano). Its great to know that there's people out there who love the piano, science, the mind and the heart as much as I do.

Have a great weekend and I owe you two more Halloween stories. TBD by October 31, 2020. 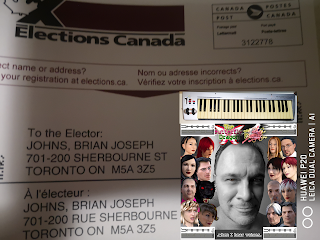 Identity is not defined by a single day's action but by a lifetime of thought, word, action and reflection.