Thank you to the Asian community who tried to warn me about the attack I'd experienced a couple of days ago. I do really appreciate that, even if I didn't outright recognize it right away.

When you get attacked like that, in the form of harassment with hate bombing, it really causes anxiety, which is tied to PTSD, meaning that you experience the anxiety of reliving a painful or traumatic experience. Many Veterans of the Armed Forces experience the same thing, when subjected to stressful situations and this becomes manifest in anxiety or outbursts resulting in mania or rants, very similar to the one I posted most recently, though I can't say that I'm a Veteran of combat in that sense and I'd never take the identity of a Veteran or any member of the Armed Forces. That's something you earn, that cannot be given or taken by anyone.

So my most recent post though sincere and certainly something I stand by, was the result of an abusive attack by neighbours and others involved in this game of red versus blue versus brown colour symbolism.

What makes this important enough to post about when I'm in my senses and right mind again? Well this subject is very important especially given the fact that both the United States and Canada are in the midst of elections. Canada's is upcoming, on October 26, 2020 (I recently received my voter's card). The United States election is November 3, 2020.

Consider that most of the representative offices in our mutual systems (both Canada and the United States) rely on colour symbolism that make up a big part of what each party represents. For instance, in the United States, red is most often associated with the Republican Party, while blue represents the Democratic Party. The United States operates generally on a two party system, a system that has worked for them for a long time. Certainly since their Declaration Of Independence.

A lot of American media dominates global media in terms of presence, and in that presence remember that colour symbolism plays a very big part and influence in local affairs as well as global affairs. Given the fact that every country has their own system of colour symbolism related to their tradition and history, this really has a very big impact on how we relate with each other globally, not to mention between our two bordering countries amid the COVID-19 crisis.

Consider that in Canada, this party based colour symbolism is nearly the opposite. Not only is it the opposite, but its expanded. We have a multi-party system, with three major parties and several other parties who also hold and have held a growing number of seats in office since their formation. In Canada, the major parties in terms of colour symbolism are the Liberals, which equate to a balanced Social-Democratic-Business values in terms of their priorities, though they are symbolized by the colour red. The Conservatives, whose values reflect business interests, deficit reduction and reduced social program spending, aka the budget belt tightening party who are represented by the colour blue. We also have the New Democratic Party (NDP) who represent people and socialist values, and responsible business ethics who are symbolized by the colour orange (a civic colour). We have the Green Party, whose values represent the environment, sustainability and Canada's natural resources with a focus on protecting the country from exploitation, who are symbolized by the colour green (please tell me you didn't see that one coming).

So consider the fact that when it comes to colour symbolism, that colours are more powerful than brands, because more people associate themselves with colour as a brand, rather than what those colours are symbolized to represent in terms of their values. With election coverage as a part of the global mass media, consider that colour branding is a big part of global mass media, especially the internet. Virtually everything is symbolized by a strong presence of colour and colour symbolism. That's not to say that colour is wrong at all, but it is to remind people that it is very present and that our impressions of things relies heavily upon our associations with colour and colour symbolism.

Consider that most of the vote is branded by colour symbolism. Your vote is either red, blue and if you're in Canada, that is expanded to become: red, blue, orange, green and any other parties and their colour symbolism brand.

We're bombarded by things that alter our impression of what colours mean, and therefore because we associate those things with a particular political brand, we're under the influence of our impression of colour symbolism in such a way that it may actually be used to affect how we vote and who we vote for without even realizing it. This isn't to blame mass media, though keep in mind that there are some players in the global field who likely are aware of this and keep an eye on how things are affected and unfold in this way.

All I'm saying is to keep your mind about you. Don't let colour symbolism influence your perception of anything. Liberate yourself from that concept because we're bombarded by it on a daily basis and that might subconsciously affect how we vote.

I'm an atheist and I certainly lead towards Buddhism and Taoism, even as a Canadian. I had some bad experiences with religion and made my decision to part ways and find an alternate path. However, there was one thing from religious texts that stuck with me that goes: do not worship false idols. Despite my being an atheist, I would never reject something because it originated from a religion, the same way that someone religious might reject something because it originated outside of their religion.

I believe that the term: do not worship false idols is a very wise term, and that it reflects the mania surrounding worshipping colours rather than what they symbolize for a given paradigm. In the most prominent case of current paradigm, colours symbolize the election parties, however, our own interpretation of colour might not be in sync with the symbolism of electorate parties in the party system. So we might actually bias based upon our impression of colour rather than our impression of how a political party will represent us in office. That's very profound if you think about it.

The importance is to be aware of this, because our vote is very important and represents our interests in the country and the world.

So keep your head about you and please don't prejudice your own opinion by whether good wisdom comes to you from a source outside of your own beliefs. If it really is truly wise, its universal, believer or not.

Don't let my rants and griping prejudice what I'm trying to say to you here and now in this post. Please consider this when you cast your ballot no matter where you live. Keep your own mind about you and don't let colour symbolism affect your vote by voting for the symbol more so than you vote for what it actually represents. This applies equally to the United States as it does to my own home country of Canada, and this is not a shot at China in the absence of their own electorate system of the people. We all learn from each other and hopefully we're never to big for our own britches to avert doing so.

If you consider taking this from me, at least give me some credit for having recognized this phenomenon and trying to liberate you from it. I mean in my own country I was so startled by the risk there was to the electorate system, that I actually drew up an intelligence report to the Federal Police to inform authorities that colour symbolism could actually be used to undermine our electorate process and take our freedom from us. I have friends in the Canadian Military who've made oaths to protect our way of life. In becoming aware of such things, its my responsibility to my fellow citizens and to my friends from the Military to make others aware. To liberate. A lot of people fought to ensure we have this freedom and adaptable system . We'd better defend it and that starts with our vote and being fully aware of how our own interpretation of colour symbolism might actually undermine our own vote.

To Rick Moranis, as a fellow Canadian, I sincerely hope you're doing well and that your heart is swelling in the show of support against your assault. Please encourage your American and Canadian friends to vote and to consider what I've stated. 😉

Once again, thank you to my friends in Japan, China, Vietnam and Thailand who tried to warn me about the harassment attack I'd experience previously in the week. I very much appreciate it and you'll always have my heart and mind in your corner should you always remain sincere and fair.

Thanks to those Canadians and Americans on Twitter who've been active in promoting the vote and reminding people of the importance of their own determination.

Thank you to my readers as well. I very much appreciate the fact that you make time to read my consideration of others' points of view in this mortal coil of time we call life. 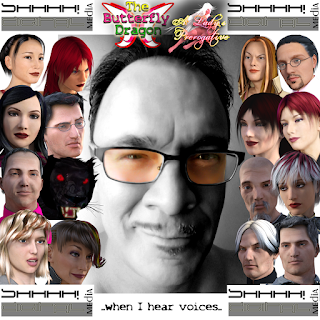