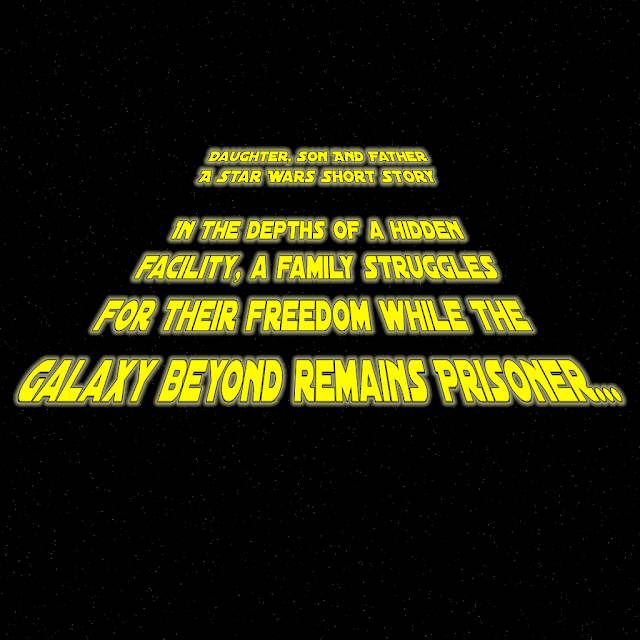 
Disclaimer: This story is based upon Star Wars, the worlds and creative properties initially created by George Lucas, of which Walt Disney Corporation is now respectfully the holder. This story is not canon as per their license nor is it endorsed by either Disney or George Lucas respectfully. Upon the request of either, it shall be taken down from publication on Shhhh! Digital Media.


This is a work of fiction. Names, characters, business, events and incidents are the products of the author's imagination. Any resemblance to actual persons, living or dead, or droids, or actual events is purely coincidental.

“You will find only what you bring in.” – Yoda

"There is always a bigger fish" – Qui-Gon Jinn


"Since the deadly order was given from the depths we've not bore saber and kept our abilities under check. We've remained hidden. Quiet. The disappeared." – Sylin

Kamino. An ocean fortress. A volatile word for home is the word fortress. Home of the once and great engineers. Hidden. Beneath the waves of a great and turbulent ocean.

Once upon a time, their cities sprawled about the surface. Defying waves. Breaking tides. Quelling the restless water.

Masters of life they were, though not so much their own destiny. Betrayal is ever the most elusive foe. Both a friend known and enemy unheard. Treachery unseen.

As it was for Kamino. The betrayed. By the Empire they helped to secure. First by way of treaty. Then policy. Followed by occupation. Ending with annihilation. Genocide. Galactic erasure. Who would know?

Disappeared, they did. Beneath the waves. The angry water kept them. Hidden. Imprisoned. Fish looking out from the bowl. To the galaxy. Their only hope of escape. Liberation Freedom.

They were not alone. With them they brought their greatest allies. Wrought from the very technology that brought them to this fate.

One daughter. One son. And the once and great father. A cruel trick played by time upon them all. Their roles reversed. Their mortal coil writhed. For they were clones. The only children Kamino had known.

They too from within their abode, looked out upon their keepers. Never knowing that they were all prisoners. Beneath the waves. Within the bubble.

Only the waves were truly free.

"You need to concentrate. Take time to understand the question..." a tall and slender being spoke.

Its back turned to the pupils. All three.

"We have answered. We've played your game for oh so very long." Leia responded.

"We don't need this?! We're not meant for this!" Luke stood from his desk, feeling a sharp jolt in his legs.

Leia and Luke were young adults, approaching their late twenties. Far beyond the capabilities of any naturally grown citizen.

Luke winced under the pain and quickly fell back into his seat.

"Beyond this place - your home - it is a much more cruel and unforgiving place. Vast and dangerous. And what are your thoughts Anakin?" the tutor replied, inquiring the remaining student.

"I think the electrical emitter is above us, in a ceiling transmitter, coupled with the power uplink. If Leia or Luke were to use their datapad as a projectile they might actually be able to disable it." Anakin examined the ceiling as he answered.

Anakin was much younger. Perhaps in his late teens. Fearless. Undisciplined. Unfettered by the need for freedom. Feeling more so the want of order. Something with which his older kin could not empathize.

Leia sympathetically looked upon Luke, who rubbed his leg in pain. He looked over to Leia upon hearing Anakin's reply and together they wasted no time.

Luke's datapad suddenly flew through the air at high speed upwards to a point at the ceiling. Upon contact it exploded, sending sparks and minute shrapnel about the room.

Anakin had seen their reaction coming and instantly, more so instinctively shielded them from any damage.

Leia meanwhile, reading Luke's emotions and following her own, had used her abilities to shield the tutor while Luke telekinetically hurled the datapad at its target.

The end result was that the electrical trap containing them for the lesson had been dispatched and none of them, including the tutor had been harmed.

"I told you." Anakin replied in a cocky tone, quite proud of his observations.

"And yet you failed to protect everyone..." the tutor responded to Anakin's egotism.

"I succeeded in protecting everyone who mattered. They chose to protect you. How fortunate for you." Anakin responded, a darkening smile upon his face, referring to the fact that he'd protected both Leia and Luke.

"What does this lesson have to do with the history of Coruscant anyway?" Luke stood defiantly, challenging the tutor.

"Coruscant was once the seat of liberty. It very quickly became the throne of oppression. Much like the energy trap that kept you in your seats. Liberty and tyranny can change places in an instant. Something for which you must be ready." the tutor advised her students.

"Hypocrisy, coming from you. We're prisoners here in your so-called school of betterment. You dare to keep us here. You imperil yourselves." Anakin countered their tutor.

"Anakin, we are all prisoners here. You will be free from this place one day only to realize that we are all being kept by a much more potent adversary. However, if you agree to improve our security technology with your unique abilities, we will promote you. Free you. Give you a position of power in this place. What say you to that?" the tutor posed.

"And sell out my own kin? What would you have of me? To become the prison keeper of my own family? You grow far too snide in your regard for our bond, tutor. Cherish your breaths for you never know when they may become a rare commodity..." Anakin concentrated, straining his abilities.

For a moment, the tutor gasped and stumbled. Then the security system kicked in.

Another jolt of energy was emitted, this time directly through Anakin's desk. The electrical shock quickly incapacitated his concentration. His constrictive grip over the tutor diminished and he ceased his attempts to incapacitate their teacher.

"Anakin! You can't do that! Don't. If we're to find a way out of here, we'll do it together without the need to take life." Leia pleaded with her younger kin.

"As you wish, though sometimes to save life, one needs to take it. My concern and loyalty is only for the two of you, my family." Anakin advised her.

"Anakin, listen to my sister. For lack of a better term, we're like your parents. Listen to what she is telling you for it is for the good of us all. Not just us as a family, but for life. The lives beyond this place. We all look out for one another. We are a part of something much greater than ourselves alone. Be mindful of that." Luke spoke compassionately.

"Your need to protect everyone else is my need to protect us alone. If I don't look out for us, it is clear that you obviously will not. That could be the end of us. Something for which none of us wish. The tutor speaks of ending oppression, yet has a weapon ready to quiet me upon my protest? Where is the freedom in that?" Anakin held his point.

"The Empire used similar tactics to quiet its adversaries..." the tutor began.

"Yet they are gone, as are the First Order. Then why are we prisoners here in the murky unknown of some watery world just systems away from the Maw?" Anakin continued his protest.

"You've been using your abilities again Anakin. Keen observations. We will speak of this later given your recent protests. Consider this lesson ended." the tutor rubbed his throat as he strode towards the door.

As the tutor left the classroom, the lights dimmed and the back wall of the classroom slowly slid into the floor, revealing a hidden kitchen area and living space beyond. Within, a stained silver RA-7 Protocol droid worked feverishly preparing a meal for the students.

"Anakin... oh Anakin. I know how much you care..." Leia quickly found her way to Anakin's desk, running her hand through his shortly cropped hair.

"I only care for us. If I don't, who will?" Anakin stood, delicately grabbing Leia's hand.

"We will, but never at the expense of others. We can expect the same consideration if we follow that ideal." Luke joined Leia and Anakin.

"I'm sorry. I just did what I thought would protect us. I really do care. I don't like to see them treat either of you that way." Anakin replied honestly.

"We'll look after ourselves together and together we'll get through this. Besides, I think that Raz has a great meal ready for us?" Leia addressed Anakin and then turned to the protocol droid in query.

"In a few, it will be ready. May I suggest a glass of Neepa juice until then?" Raz replied.

"That sounds like a great idea, Raz." Luke answered.

"Me too. I'll take mine with a twist of tafil." Anakin added.

"Coming up." Raz replied, making its way over to the liquid nutrient dispensary.