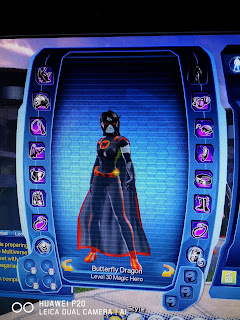 Sorry about the quality of the pic but it is a picture taken of my screen with my phone. Yes, I am an occasional gamer. I stand by gaming just as I do reading or enjoying a movie. They're experiences from which you learn something without the risk associated with that lesson.


She's completely original, and no, I'm not a vampire writer who absorbs other people's creative abilities to benefit myself. I'm not a vampire at all. I come up with my own ideas and always have. In fact, my teacher in grade school first enrolled me in an extra-curricular creative writing class when I was 11. In other words, I was writing so much at that time that they put me in an additional class to my regular schooling. It just took me a long time for me to pursue the path of writing but it was something I've always been fond of doing.


My point is that I'm just not keen on associating my characters with any specific religion, especially a religion that has a history of oppressing Women or conducting shunning against relatives of Witnesses that aren't a part of the religion (like myself, being an Atheist Taoist Buddhist since early 2007).


In fact, I've found that many people who are radical about their religious beliefs will go through great lengths to trick someone like myself into contradicting my own belief system as if my beliefs are simply a set of rules that constrict my behaviour, and that by breaking those rules I'm suddenly ejected from my own beliefs. Even when I contradict one of the edicts of my beliefs, I'm still just as much a believer. I mean there's obviously a lot of people who oppose other religions such as Taoism or Buddhism that go around reading Lao Tzu's (or Tzi's) Tao Te Ching, just so they can trick Taoists into contradicting the "rules" of their religion or reading about the eight fold path so they can trick Buddhists into contradicting theirs.


I'd say that anyone who thinks that to be the nature of belief, a set of rules constricting your behaviour so as to produce the desired behaviours is sorely mistaken. Going on that logic, then any religion that lives by the Golden Rule, do unto others as you would have them do unto you would be a windfall for any Sado-Masochist.


Don't take that as a criticism but rather for its insight lest you miss the point: No belief system is perfect, but your beliefs are perfect for you. Even if you believe nothing at all.


That doesn't mean that you can go around imposing the rules of your beliefs upon others, especially where they contradict the rule of law and the human rights code.


If you're a Sado-Masochist and go around hurting other people, then chances are you'll eventually have to deal with civil law on that issue because everyone has rights that protect them against such treatment by others.


Believe as you will. Its protected by law. But don't go around imposing your religious rules and laws upon others.


I enjoy my own versions of kink in my personal life. I'm not and never have been a "holier than thou" kind of person at all. I take my beliefs seriously, but not extremely. Life is about balance. If someone else outside of your person tries to destabilize your balance, and you end up lopsided in some way, don't fret. You're still in balance because that is the nature of the universe. If you start chasing your beliefs like they're a set of end all be all rules governing your behaviour, you'll end up a puppet to other people's whims and believe me, there's people who get their kicks doing just that to other people. The truth is though that the joke is on them. They're the ones missing out on life as doing that to other people is quite a time and energy-consuming task and they're caught in a trap chasing a perpetual illusion.


I wouldn't want to be them when they're taking their final breaths of life in this existence. They're going to have issues. Big time. It's sad really and such a waste, but we all make our own choices and the weight of those choices will come down to those final moments. You can run from everyone else but you can't run from yourself and your conduct in life especially towards others. There's no amount of polarity reversing that will change that. The sooner that we're able to take responsibility for our own words and actions, the better people we become. Be fair to others and yourself.


I certainly don't want to send the message to others that its alright to shun, stalk and harass other people no matter what any book of religion says on the issue. Not to mention that I don't think I'd count myself as being on the blue side of the fence. There's bound to be people who won't accept or aren't happy with the fact that I'm not a member of Christianity or Catholicism, we're all entitled to freedom of our religious choice, even if that choice is atheism. There's bound to be people crazy enough to think that I'm possessed by someone else, or even being controlled by someone else but that's not the case. I can assure you that I, Brian Joseph Johns am not Catholic but am in fact an Atheist, Taoist, Buddhist. One of the things most people will never appreciate fully is the right to choose their own beliefs, without people trying to skew the truth of that matter, secretly or otherwise and believe me, there's people who do just that and use the symbolism of colours to hide their crimes and lies on other people and to steal identities too.


So those are the facts.


Also, Women's rights count just as do all of our rights. That's the message that I have through Shhhh! Digital Media, especially given the fact that Shhhh! Digital Media is the home of my A Lady's Prerogative series, not to be confused with the book of the same name by Annabelle Anders which was published in 2018. I'm sure that it's a good read, though I haven't read it myself. I mean it would certainly be awesome if any of us guys could actually be that guy of a woman's fantasy for our own love interests and spouses.


Thank you to my loyal readers.

Thank you to the great people working to make Toronto a better city, affordable for all, opportunities for all and freedom from social abuse and identity theft.

There will be more to come soon. Very soon. Very, very soon.


Merry Christmas🎄, Happy Hanukkah🕎 and Happy Holidays to you, whatever you may celebrate during the time of the Winter Solstice!


One of the key symbols of this time of the year is that we're at the calendar time of least daylight, and that from the December 21/22 onwards, the daylight hours will continue to grow until they're at balance in the Spring Equinox (March 21/21).


This time of year really symbolizes the growth of light.